KOR-108 is a new reducing rolling mill. It has a steplessly controlled rolling speed, using only one motor. New gear boxes provide a very silent operation.

It is available with constant speed or a speed gradient between the roll pairs.

KOR-108 is easy to service and designed to work with existing GRANLUND bearing box assemblies. The production speed is higher compared with older types.

The machines consist of: 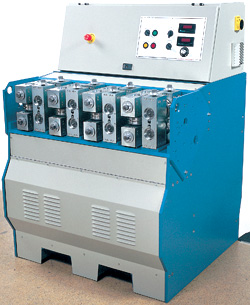